A seasoned commercial fisherman turns his eye toward a different catch.

Bill Webber, a lifelong Cordova, Alaska commercial fishermen, marine engineer and inventor has launched a new website to attract customers to his fresh fish trade in Cordova, Alaska. For the past 15 years he has been working on developing an automated (on-boat) intravenous pre-rigor fish processing technology that he hopes will revolutionize the commercial salmon industry. And Webber says this year, he’s close to proving his technology works. He just needs some good fish runs, that so far early in the season have not yet materialized. Using his on-boat processing technology and careful handling throughout his vertical integration process, his salmon will remain fresh up to 19 days under constant refrigeration without suffering quality degradation.

As Bill writes on his Facebook page, the new website is called Gulkana-Seafoods, and the Copper River salmon are processed fresh at sea and are “first owner purveyed”. Customers who set up a profile page on his site can then order direct from Webber and know they are getting the best of the best. 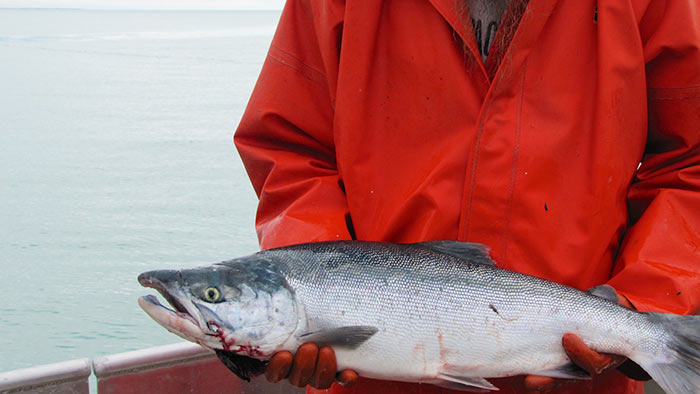 Rebecca and I were fortunate enough to go out on Bill’s boat a couple years ago and he showed us some of the processing technology that he had on his boat. According to Webber, fish that are intravenously pressure bled and gutted upon capture and immediately put on ice, retain the highest quality and freshness. When fish are not pressure bled at sea and that’s generally the way commercial salmon fishing is done, the fish are prone to faster decay.

Here’s a portion of what Bill had to say about preserving quality and the advantages of pressure bleeding and gutting a salmon before rigor mortis (pre-rigor) has a chance to occur.

The benefits of pre-rigor processing are not widely done in industry. It is the harvester that embraces vertical integration such as I that can even produce a quality specification like mine.

Getting all the entrails removed from the salmon before it goes into rigor virtually eliminates the enzymatic degradation that occurs post rigor. Furthermore removing as much blood from the fishes body is a good thing as well. Blood is one of the organs of the body that is overlooked in defining quality specifications. Blood can deteriorate much faster than the flesh and can produce a very unclean finish on the palate or fishy taste over powering the flavorful taste of the flesh. It doesn’t really take an afishyanado to discern this. For those who would like to see his story, here’s the video we produced: Copper River Salmon In Cordova, Alaska